Compiled by cowboys, confirmed by ghosts.

From Hell Among the Yearlings: Caleb Meyer

From Time (The Revelator): Revelator, Red Clay Halo, I Want to Sing That Rock and Roll, I Dream a Highway

From Soul Journey: Look at Miss Ohio, Wayside (Back in Time), Wrecking Ball

Scott Garson curated another edition of Writers’ Playlist in which me and others talk about songs and ourselves:

I chose “Life is Good Blues” by Laura Viers, and there’s stuff by LCD Soundsystem, Prince, Joanna Newsom, everybody.

Also worth a look:

Finally, big congrats to Brian Baise, whose story The Coyote is a storySouth Million Writers Notable Story of 2010. I worked with Brian on the story as guest editor at NOÖ Weekly.

At the time of the story’s publication, I wrote, “I solicited a story from Brian Baise because of a story called “It’s Nice When Someone is Excited to See You” that appeared in McSweeney’s #29. Rarely am I knocked out by a single story in a journal the way I was by that one. It’s funny and sneaky and sharp and tender, and it demands at least a second read. But first, read this new one, “The Coyote,” for which I’ll gladly trot out all the same descriptors. This is prose that knows when to perform and knows when to get out of the way. Baise’s got a knack for writing his way into the headspace of these small oblivious men and the jerks who tolerate them. The humor/pain of his stories exists in the gap between how these men see themselves and how the world sees them.”

You can read “The Coyote” here.

FUN CAMP will be published by Mud Luscious Press

Whoa, whoa, wow: Friends, I am very excited to announce that FUN CAMP, my novel-in-shorts, is going to be released by Mud Luscious Press in 2013.

A huge thank you to Mud Luscious editors J.A. Tyler and Andrew Borgstrom for giving the book their close attention and interest. I also want to thank Sasha Fletcher, who strongly suggested I send MLP the book. “I don’t know,” I said, “I think this book is too chatty for them.” And then I sent it anyway.

I’ve posted a lot of google image camp pictures on this blog. Now here are a few personal ones (all enlargeable): 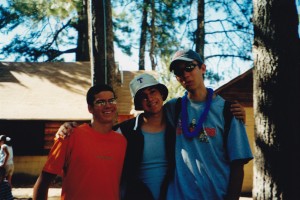 me on the far right

Two years is both a long wait and not a long wait at all. Two years ago, I’d already written a handful of the earliest pieces in FUN CAMP. Two years from now, I will still occasionally be getting ideas for new Fun Camps and begging J.A. Tyler to stop the presses so I can cram new ones in.

So let’s all promise that in two years from today, we’ll meet again, and we’ll see what kind of people we’ve blossomed into. I will be the one trying to sell you a book.

There Will Be Blood

I met Debra Leigh Scott at the AWP book fair in DC, and then she interviewed me and others (Sarabande, University of Iowa Press) for her New York Journal of Books article, Small Presses and Literary Magazines Continue to Innovate and Thrive. Seems like she went away with a positive impression of the small press book world. Check it out!

If I write a marriage memoir, it’s going to be called, Want to Split a Beer?

My favorite bit in This is Spinal Tap: David says, “You know, if we were serious and we said, ‘Yes, she should be forced to smell the glove,’ then you’d have a point, but it’s all a joke.”  Nigel jumps in and says, “It is and it isn’t. She should be made to smell it, but…” and then David goes, “But not, you know, over and over.”

I wrote a bunch of dumb lists this weekend, starting with the Radiohead one. I’ll roll them out now and then.

I have this vision where if we fill the internet up with enough dumb lists and cats, some brave government will eventually roll out The Internet 2, a long continuous sheet of blank bytes across the ocean floor. What will we fill it with? Will the internet’s sequel be the one to actually save us?

I sang The Hearse Song for my tutoring kids and won big points. By the end of the day, they all had photocopies of the lyrics. I’m glad that Scary Stories to Tell in the Dark is no less cool now than it was when I was a kid. I was surprised, looking at the book as an adult, at how many of the stories ended with instructions to scream something spooky. Maybe that’s the ultimate ending to anything.

Bob’s Burgers is funny. Great use of Kristen Schaal.

Archer is another edgy cartoon that gets too many kicks out of oh yeah I went there. I’ve seen the first 3 episodes. Maybe it gets better.

From this Norm MacDonald interview: “In my entire life in comedy, I’ve only seen Kinison, Stern, Saturday Night Live when I was a kid, and Letterman’s first talk show—those are the only original things I ever fucking saw in my whole comedian life. Everything else, you say, “Oh, I’ve seen that about 10 billion times.” There’s that saying, “I don’t know art, but I know what I like.” The inverse is kind of true. I know art, but I don’t know what I like. You get so immersed in it that nothing appeals to you.”

And: “I guess what I find funny is that when I’m bombing, I start smirking; then they fucking hate me. Because they think I’m making fun of them or something. But the reality of it makes me laugh. Comedy is surprises, so if you’re intending to make somebody laugh and they don’t laugh, that’s funny. It’s definitely funny watching. If I’m in the back of the room and a guy’s fucking bombing, that’s the fucking funniest thing ever. There’s nothing funnier than seeing that. So I have a little bit of an out-of-body experience where I enjoy the scenario, and I really do like seeing a crowd turn into a mob, and I do nothing to stop it. People can become really dangerous.”

And: “I tried really hard on Weekend Update to do something that I considered original, which was, I tried to cut all cleverness out of the joke. I’ve always been very averse to innuendo, especially sexual. I find it cowardly or something.”

I’ve always been rooting for Norm. In high school, my friends and I watched Dirty Work many times. So little regard for acting or even wardrobe. Like anytime someone calls him Mitch, I expect him to flinch a little and correct them: “No, no. My name is Norm.”

This list began as “just my opinion” but was later confirmed by scientists.

From Pablo Honey: None. But to be fair, I don’t think I’ve even heard all of it.

From The Bends: Just, High and Dry

From Kid A: Idioteque, Everything in its Right Place, Morning Bell, Optimistic

From Amnesiac: Life in a Glasshouse, Packt Like Sardines

From In Rainbows: 15 Step, Reckoner, All I Need

From The King of Limbs: Separator, Lotus Flower, Giving Up the Ghost

From B-Sides and Other Stuff: None.

Tagged 15 step, 2 + 2 = 5, Airbag, All I Need, amnesiac, Everything in its Right Place, Exit Music, Fake Plastic Trees, Giving Up the Ghost, Hail to the Thief, High and Dry, I Might Be Wrong, Idioteque, in rainbows, Jigsaw Falling into Place, Just, Karma Police, Kid A, Let Down, Life in a Glasshouse, Lotus Flower, morning bell, No Surprises, OK Computer, Optimistic, Packt Like Sardines, Paranoid Android, radiohead, Reckoner, separator, Sit Down Stand Up, The Bends, the king of limbs, There There, top 20, Weird Fishes