Historians, when typifying the Era of Choice my generation grew up in, will cite as evidence the two simultaneous and polar opposite Sonic the Hedgehog cartoons that aired in ’93-’94, debuting within a month of one another.

The first, Adventures of Sonic the Hedgehog, was a wacky on-the-cheap slapstick weekday afternoon free-for-all featuring nonsense backgrounds and a cool/clever Sonic who just cannot get enough chili-dogs, voiced by none other than Mr. “Steve, go home, go home, go home / I don’t have to take this, I’m going home,” himself, Mr. Jaleel White.

The second, simply Sonic the Hedgehog, was a dark, self-serious hi-budg Saturday morning thing in which a mad scientist/war minister Julian Ivo Robotnik hosts a military coup of the planet Mobius, and only a team of woodland critters called the Freedom Fighters stands a chance at stopping him. Their leader? One Sonic the Hedgehog, nephew of esteemed-but-recently-captured community leader Sir Chrarles Hedgehog. (Inviting the question: Why would Sonic’s parents give him the middle name “the”?) Sonic’s voice? Also Jaleel White. An Urkel monopoly. 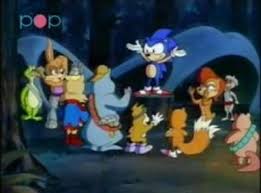 We kids, in our jammies and sugar cereals, had options regarding which interpretation of Sega’s most popular brand we wanted to see. Determined or goofy? Luke Skywalker or Pauly Shore? Power rings or chili-dogs?

This luxury was offered to us for free, historians—don’t forget to mention that—free as long as we watched commercials for toys that really did look great. Catered to as we’d always suspected we deserved to be, we came to distrust the outdoors.