Meets at the Park Reading Group: Dostoevsky’s The Idiot

1. Is it nice outside today? Discuss.

2. Dostoevsky once wrote that in The Idiot his idea was to portray “a beautiful man”. Do you think he meant to say “a handsome man” but just got confused for a second? Or can we read much of Myshkin’s awkwardness as a crisis of sexual identity? Briefly flip through the pages and try to find an instance of Myshkin wearing a dress or women’s undergarments or jewelry.

3. In Part One, Chapter Ten, Ganya tells Myshkin that “nothing offends a man of our day and our race more than to tell him he is not original, that he is weak-willed, has no particular talents and is an ordinary person.” Discuss how different 21st century Americans are from 19th century Russians. Is it nice that we have freed ourselves from this animal lust for originality and talent? Does our superiority make arcane books like The Idiot a pain to read or can we use these books as a self-esteem booster?

4. How about Myshkin’s proposal to Nastasya? Awkward am I right? Have you ever been suddenly stirred to publicly proposed marriage to someone? How’d that go for you? If your proposal was shot down, what reason was given?

5. Did anyone remember sunscreen? If so, would they be willing to share? Is anyone still peeling from last week? Compare and contrast each others’ tans and burns. Are you jealous of the woman who is always tan but never seems to burn?

6. Imagine a conversation between Prince Myshkin and the “underground man” from Notes From the Underground. Would Myshkin in his Christ-like patience be able to stand the guy, or would Myshkin fake a seizure to escape?

7. That general tells some whoppers! Discuss old men you know who lie to get attention. Do they know they are doing it? Have they ever, like the general, claimed to have met Napoleon as a boy? Or Teddy Roosevelt? Does Alzheimer’s actually exist or do many people just get mischievous near the end?

8. Myshkin, on the death penalty: “To kill for murder is a punishment incomparably worse than the crime itself.” Here we go, now things are about to get interesting. What do you think of the death penalty? Start by going around the room but then cede the floor to those with the loudest voices. (Note: Make sure everybody comes to a consensus on this one. None of that agree to disagree crap. If necessary, send that sunscreen around again.) 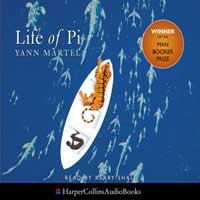 1. Did you listen to the audio version, or just read the paper book? If you read the book visually, how did that affect your driving? If you dropped the book in the passenger floorboard, did you pull over, or just try to reach for it when things slowed down? How did that work out?

2. What’s the worst thing that ever happened to your mother? Feel free to make something up. (Leader’s note: this last question will give you time to pee or get coffee if you showed up late to the meeting.)

3. When you got to the part where the other floating survivor bumps into Pi in the night, did you have to rewind to be sure you hadn’t missed something? Did you ever find your place again? Is that when you quit the book and started listening to Rhonda Byrne’s The Secret, instead? How would the book have ended if Pi had a copy of The Secret on that life raft? Remember: tigers can’t even read, so he wouldn’t even have known what The Secret was.

4. Do you think someone in your carpool could have read it to you? Discuss how reading books together while driving might save the environment. What if someone read you the book while you were driving from an e-book on their handheld device? How many trees do you think would be saved? Or commuter minutes? Ozones?

5. How would the book have been different if the orangutan had known sign language? Would it have made you more interested in zoos? Can an ape who learns the sign for “I love you” truly comprehend love or is has she just learned the trick that elicits the most bananas?

6. Pi liked to say, “my suffering was so great.” Pretty much all the time. Did you ever drive through for a milkshake or Jack-in-the-Box egg rolls during the parts where he talked about being so hungry? Was it out of empathy, or sheer spite? How did you know Pi wasn’t about to talk about a disemboweled orangutan or gutting a fish/turtle, while you were eating? What foods do you find you can eat in the car without making a mess?

7. If the story Pi tells to his rescuers at the end of the book was the true story, why do you think Yann Martel made up all that crap about the floating acid island? Was he just trying to ride the coattails of the recent surge in meerkat popularity? Was Meerkat Manor before or after The Life of Pi came out? How does life on Meerkat Manor compare to life on Meerkat Floating Acid Island? Wouldn’t you probably watch Animal Planet more if they had that show? What do you think the meerkats on Meerkat Manor symbolize?

8. Do you think you’ll see the movie? What are some ideas you have that might spice up the boring parts and/or keep it shorter than Lord of the Rings? Are there actors that could be cast as Pi that might make all the gross and boring parts more sexy or provocative? Wouldn’t Sean Astin be cute? What if, at the end, Pi was rescued by hobbits? Or near the middle?

9. Do you think life rafts should be equipped with guns? What about other weapons, self-help books, or Apple products? How about wireless internet? GPS? Break into partners, and make up more stuff for a lifeboat, and then rewrite the book with those items, plus whatever lead actor you chose in the last question. How does your new book improve on the original? (Leader’s note: if you need more coffee or want to make a phone call, now is the time.)

1. Animal Farm is a short novel (or novella to our Italian readers). Does it make you feel good to read a whole book in such a short amount of time? Why do you think so many books are so long? Do you think guys like Tolstoy should be blushing about the fact that it took him, like, a forest-load of paper to say what they wanted to say?

2. Go around the room and discuss how busy each of you is. Embellish a little. Remember: this is a contest. Does anyone in the reading group have time to just read books for fun? If they do, doesn’t that indicate that he or she is not one of the busier people in the reading group?

END_OF_DOCUMENT_TOKEN_TO_BE_REPLACED

In a joint effort with our friends at Camp Nutria (the attempt of some Austinites at regressing in style), Gather Round, Children brings you the first in a series of questions meant to guide readers safely through the dialectic without getting chewed up by the many pages, the flowy prose, or the loquacity of that guy who will not admit that he has only read the first 30 pages and got the gist of the rest of it from the internet. (Hint: When that guy pauses to reload intellectual jargon, simply cut in with, “Next question.”)

1. What do you think of the cover of the book? The one with the sexy lips on it? Do you find the lips to be sexy? If you do, does that make you a pedophile?

2. According to the first chapter, Dolores Haze had many names: Lo, Lola, Lolita, etc. Discuss other figures in popular culture who have many names. (Example: Sean “Puffy” Combs or Jennifer Lopez, who dated each other for a time.) Is it a coincidence that Jennifer Lopez goes by J-Lo and Dolores goes by “Lo, plain Lo, in the morning” or is Lopez consciously drawing a parallel between herself and Haze, hoping she will remain young in the eyes of her public? If yes, did the semi-creepy gamble pay off? If no, you have to admit that it’s quite a coincidence. END_OF_DOCUMENT_TOKEN_TO_BE_REPLACED